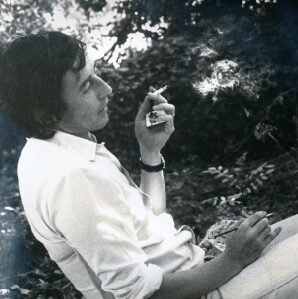 What if Jack Lézin was the best painter from Île-et-Villaine of the end of the 20th century? It is a legitimate question to ask about a truly skilled painter, trained at the School of Fine Arts of Rennes who got a belated recognition from critics after thirty-five years of drawings. He was indeed a discreet man –sometimes even shaded– and he often refused to show his work. Nevertheless, he was an exceptional draughtsman who could use graphite or Indian ink with the same ease. He was also a brilliant colourist either with oil or acrylic; a remarkable architect who skilfully mastered frescoes leaving the world wondering whether he was part of the figurative movement or different abstract movements.

He had favourite artists: some classic founders, starting with Cézanne. But he also liked some modern artists like Adami, Erró Klasen, Monory, Télémaque. Was it a coincidence, in any case? The five Narrative figuration masters accepted him indeed as one of their peers. In the same way, art historian Jean-Louis Pradel made him part of the prestigious Dictionnaire de la Figuration Narrative. Alas, Jacky Lézin had already passed away: a heart attack had struck him in 1995, shortly before his fiftieth birthday!