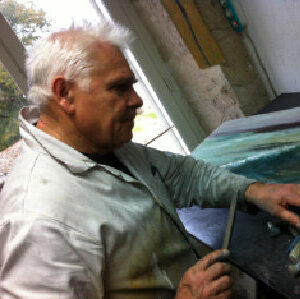 Jean-Michel Linfort has lived many lives since he was born in a Périgord farm in 1945. His first life is known: the son of farmers, he became a deputy prefect viscerally committed to protecting the rural world. He also lived a writer’s life, singing in tune the powers of the earth, just like Giono in his time– which explains his ardent books such as his famous Eloge du vieux tracteur, .which he wrote in a dense and vibrant style, stirring with anger and hope. Lastly, in the tradition of Loti, painter and poet, Linfort is a painting the countryside and the sea. He is the same man as before, undoubtedly, but this time he is wearing long overalls that he stains conscientiously .every morning in his studio opening on the old family woods.

Jean-Michel Linfort’s third vocation is to be a painter. This vocation came before both public service and writing; the truth is that he has always been drawing. First, he used a classic graphite pen; from there, his curiosity inevitably led him to experience oil painting. He then discovered dry pastel; a carnal approach, closely tied to the matter, as if he had to cover his paper with the ancient soil of his native land. His patient and endless work results every time in a bright foam of dust. How many fields, stacks, hedges, collapsed fences, furrows and wakes has he drawn? How many oceans has he struggled to paint, starring at the waves, their shapes, their colours and their shades? It is often said that “Jean-Michel Linfort is one of the finest pastel painters of our time”. A well-deserved recognition which is rewarded by regular public commissions .and by the loyal support of the Cristel Editeur d’Art Centre–he is the only pastel artist in the catalogue.