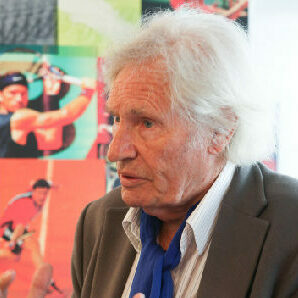 Peter Klasen’s paintings are currently exposed in more than 80 museums worldwide, a consecration for the artist. He was born in Lübeck in 1935 and trained at the School of fine arts of the Post-war Berlin. At the time, Germany was devastated, and everything reminded him of the dreadful tragedy. As he later explained, one cannot understand his work unless one bears in mind that he came to life at the worst time of humankind, during which both his father and his uncle were killed. Peter Klassen still distrusts gatherings and great theories…

How can one overcome such a tragedy? From the beginning of the sixties onward, Peter Klasen did so by creating his own painting style and vocabulary. His art became clashing and dazzling;. he started using signs such as nuts, chains and levers, tarpaulins, grids, iron doors, meters and road signs. His craft also lies in the skilful organization of those symbols over the canvas, among fragmented bodies–often eyes, mouths or breasts. In short, he sought to recreate his encounter with the blind and devastating power of an omnipresent machine.
Art history eventually considered Peter Klasen as the principal founder of the Narrative Figuration movement. Nevertheless, art historian Jean-Luc Chalumeau. might have been right when he claimed that Klasen is “the leader of the European Realist movement, an alternative to Pop-Art”. This is a way to assert that in Klasen’s work, graphic strength, instant beauty, are also a part of language. Peter Klasen displayed some of his work at the Cristel Editeur d’Art Center in Saint-Malo in 2016. The exhibition was the logical consequence of the collaboration started the year before, with the creation of two prints for the art centre.