André Tondu, painter of “Happy Life”? André Tondu, painter of the beautiful azure of the skies, of the green of lawns, of trees and horizons, of happy notes which seem to pierce through foliage, of gentle air, warm without a doubt, which circulates from canvas to canvas? Yes, of course, for André Tondu was a little bit of a magician…
For years, this creator born in Jura in 1903, then awarded the prestigious Prix de Rome in 1931, gave a rare charm to nudes, bouquets, still life, genre scenes.
The Cristel Editeur d’Art Centre gathered 35 of his works for the “André Tondu. Happy Life” exhibition in Saint-Malo.

Some may remember the way José Cabanis opened Le Bonheur du temps, wonderful book once published by Gallimard editions: “I would be another, if I had not loved the Countess of Ségur.” This sweet phrase lets one envision the brave man he was, without neglecting the amazing observer he was, what’s more author of a dazzling essai on Goya. What would José Cabanis say of André Tondu’s paintings nowadays? You’re welcome to answer, but one may believe he would immediately take a liking to the paintings. Yes, thanks to his disposition from the communion of souls, he would taste the beautiful azure of the skies, of the green of lawns, of trees and horizons, of happy notes which seem to pierce through foliage, of gentle air, warm without a doubt, which circulates from canvas to canvas? Yes, of course, for André Tondu was a little bit of a magician… For seasons long, and from the dark moments of the war, this creator born in the Jura in 1903, then awarded the prestigious Prix de Rome in 1931, strove to paint what one should call “happy life”. In other terms, life as the Countess of Ségur would tell, as he dreamt it for the kids gathered around his wife Odette, his long-time favourite model. This is where came from these subtly seized snaps of young girls running under the sun laughing until they are out of breath; or family scenes in the kitchen, the living-room, the dining-room, sometimes in the studio: we can make him out contemplating everywhere, a benevolent smile on his lips…

This is a praise of a gaze, then. But it also is the praise of an asserted hand, trained in the twenties by two reputed masters: Fernand Cormon and Jean-Pierre Laurens. We know what the first taught: steadiness of gesture, strength of the drawing. Obviously background

is useful, capable of delighting the classical, but the second made of point of perfecting it with a dose of salutary fantasy. And so André Tondu soon painted like no one else; meaning like only he wanted to paint, supported by Soutine, his neighbour in Montparnasse. The Prix de Rome did not change that. Recognized, admired, this uncategorizable artist, who does not belong to the New School of Paris, or to the Jeune Peinture movement, kept following his desires. Sometimes it led him to paint nudes with serious eyes; sometimes it was a bouquet, or still life, genre scenes where a silent irony may pierce. Then he would come back to what he loved most: little girls, or girls which grew into women, but inevitably gracious, light, both close and far away, and alike the heroine of Marie Laurencin, in many respects. Thus, it will not come as a surprise that he multiplied the representations of women reading–reader in the metro, reader in the living-room, reader at the window, as well as his Reader with pink jumper, lone, focused, mysterious and sovereign nestled in a darkened wall. “We are sure to never fully be unhappy, when we early discovered the happiness of reading” José Cabanis whispered… For everyone’s pleasure, André Tondu has a genius for taking him at his word. “And so across the world, in many places, his painting is esteemed and honoured” Georges Cheyssial, chairman of the Institute, wrote in 1986. 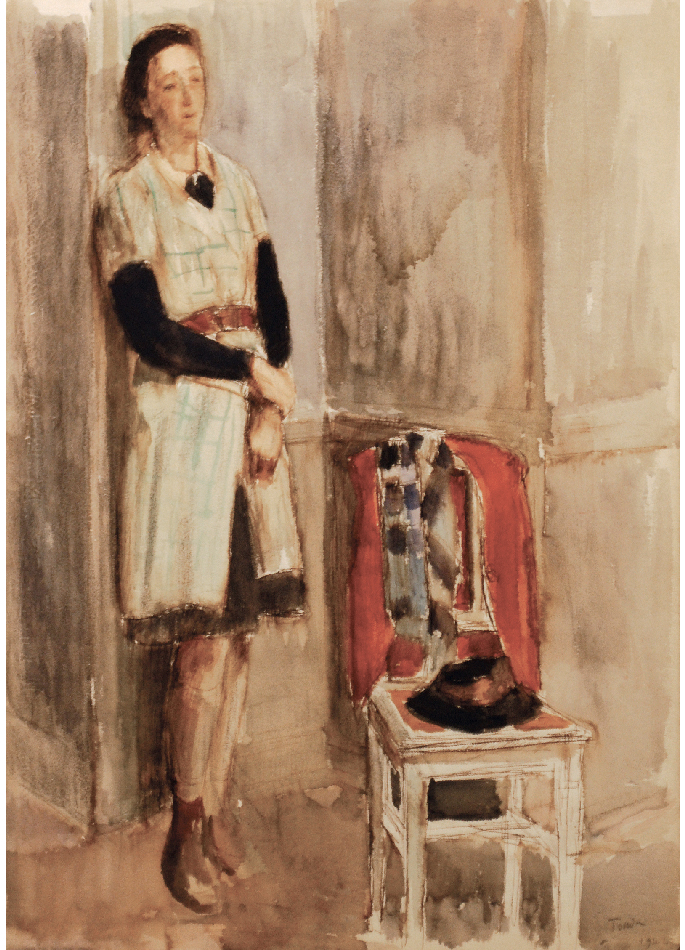 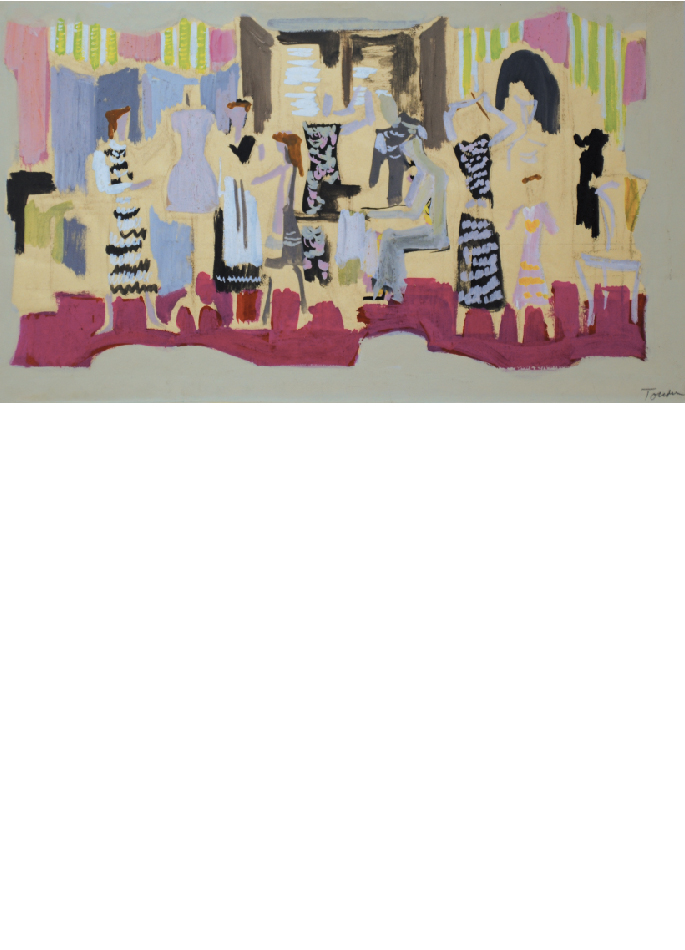 The Lady with the Bouquet 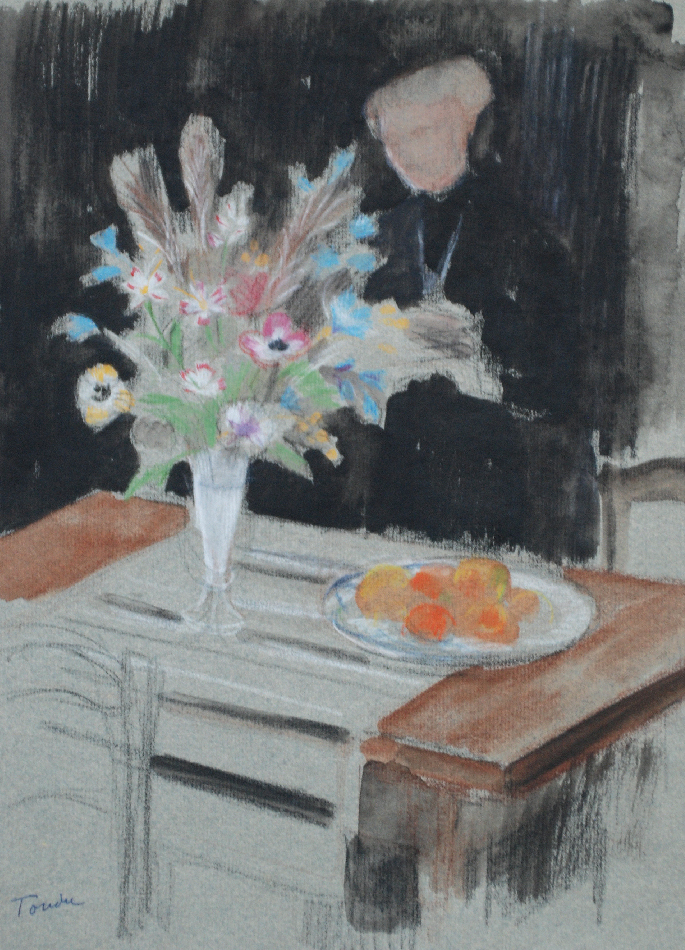 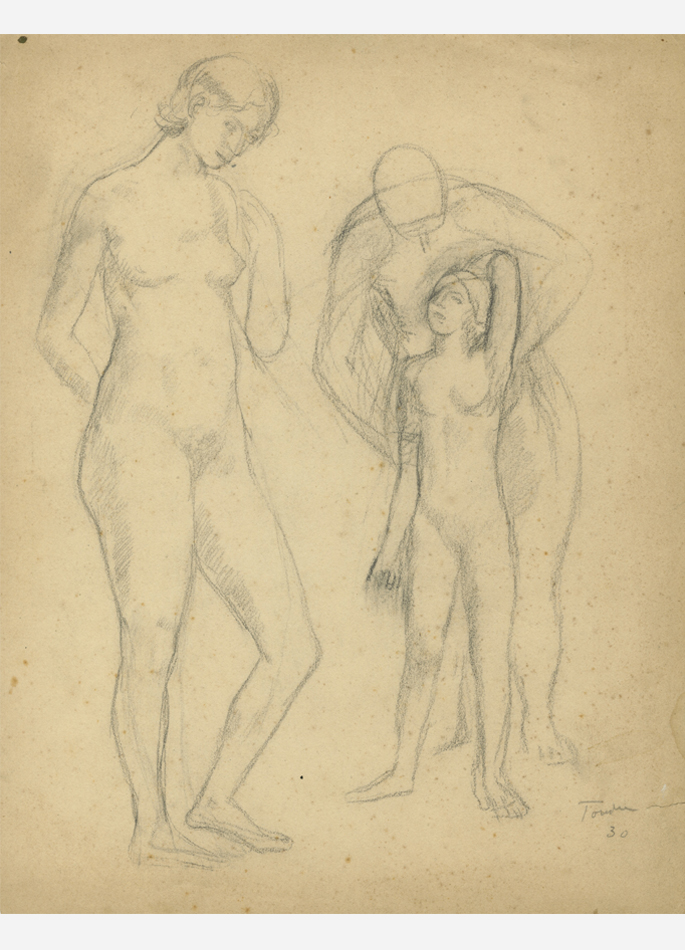 Nude Leaning on Her Elbows 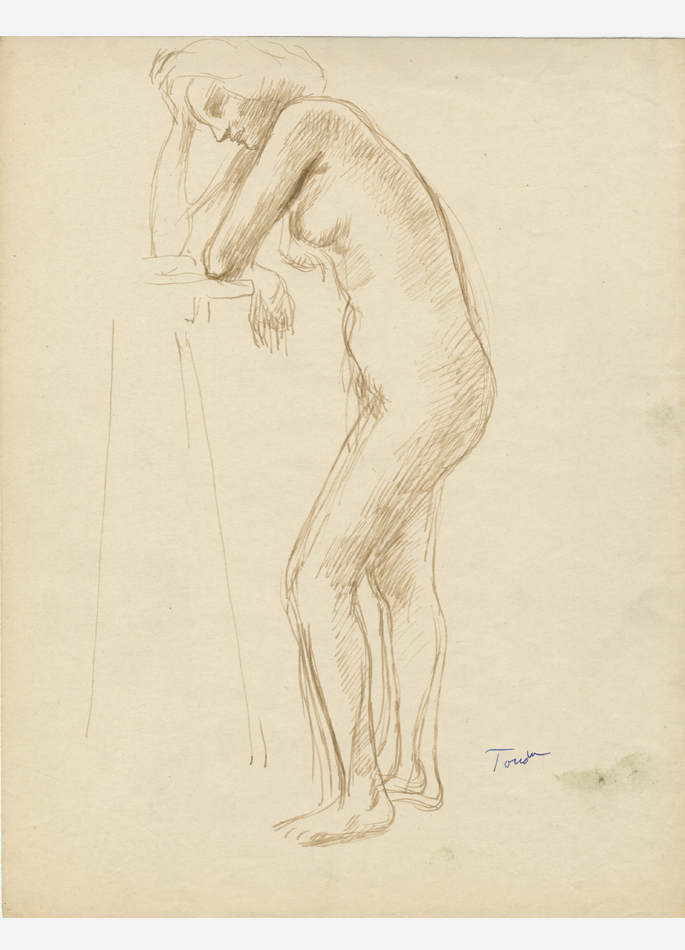 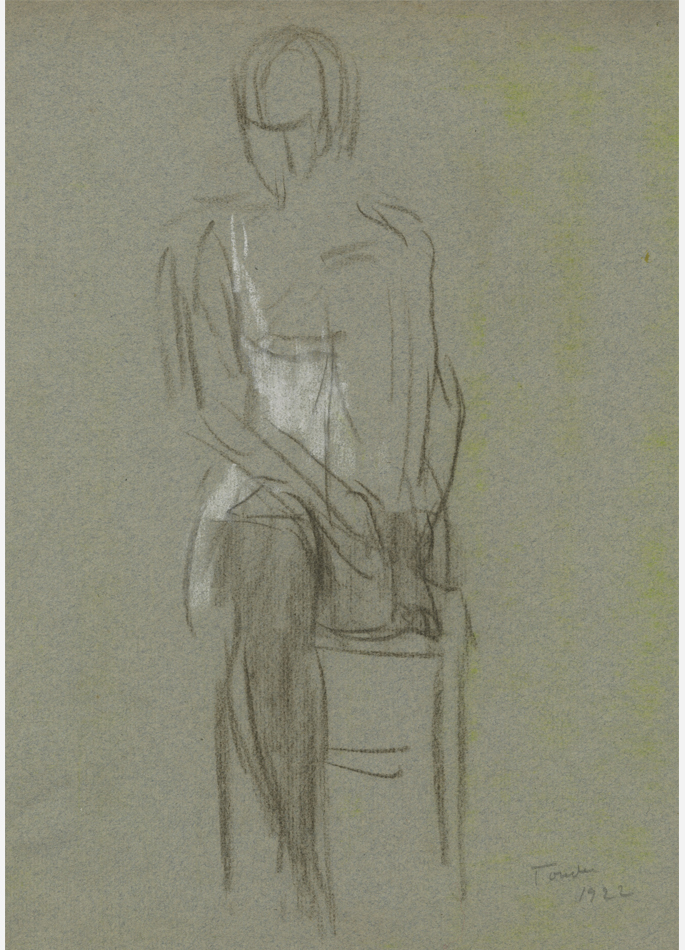 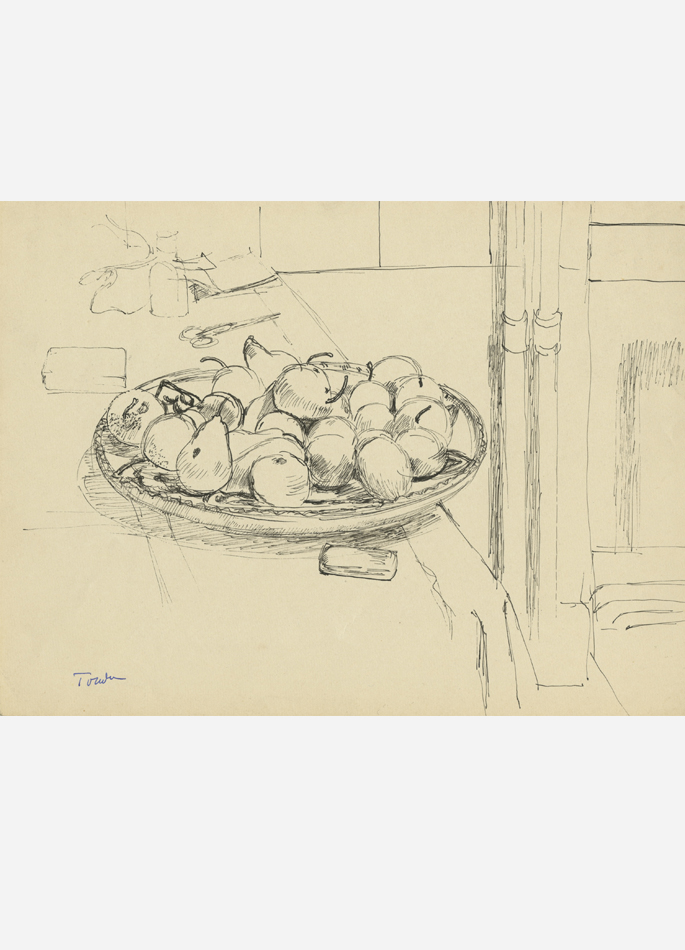 Studies of a Naked Man 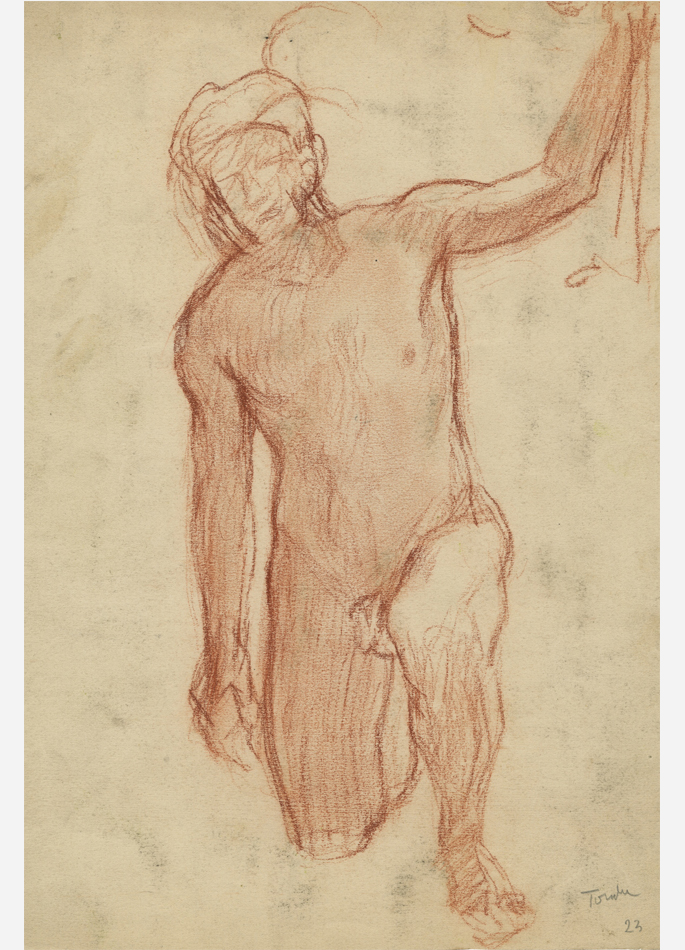 Suzanne and the Old Men 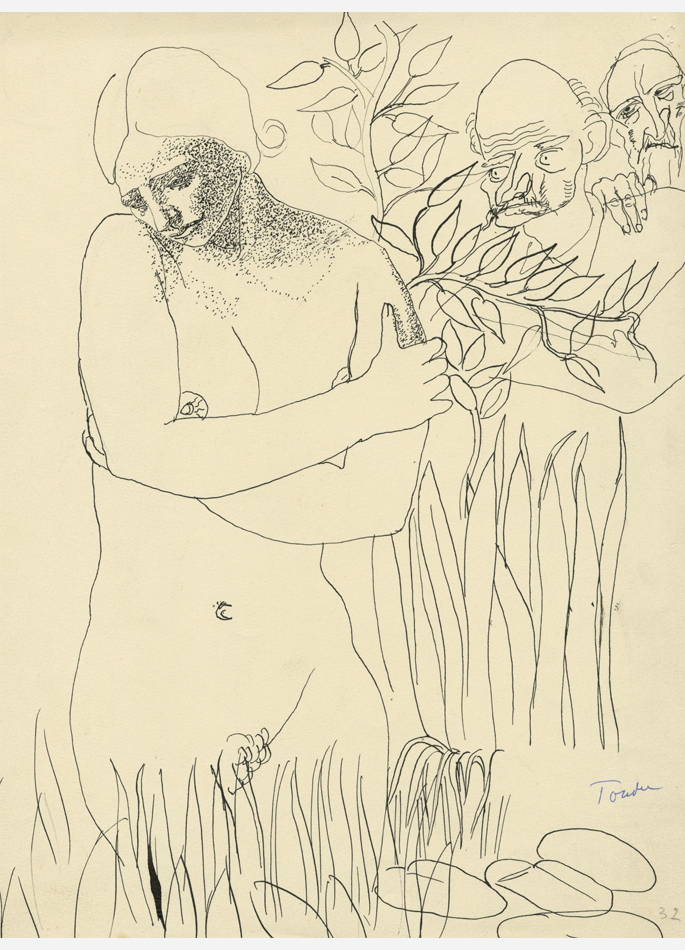 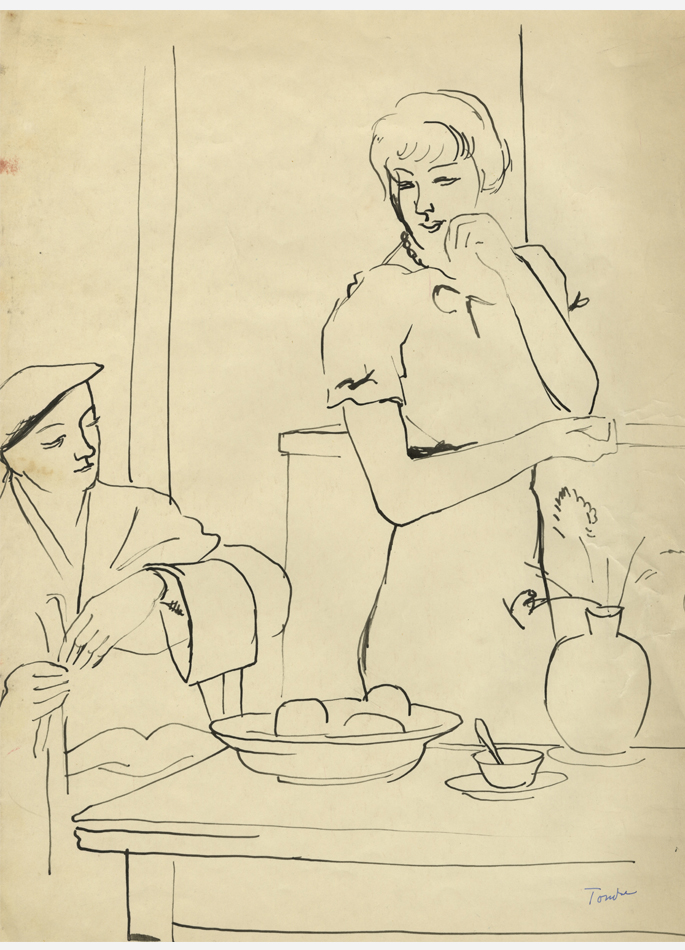 Two Models at the Sink 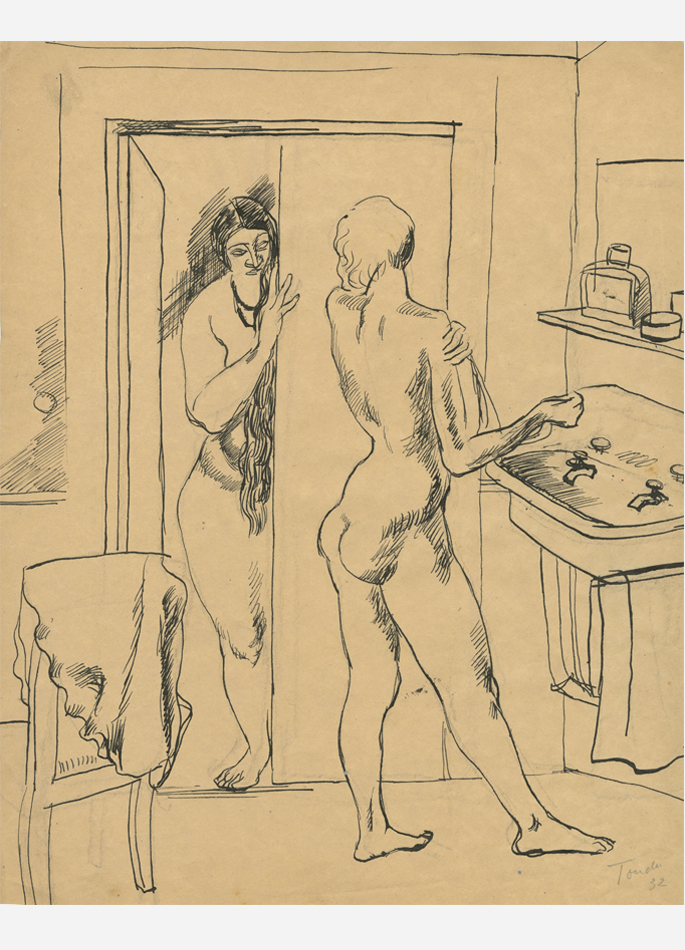 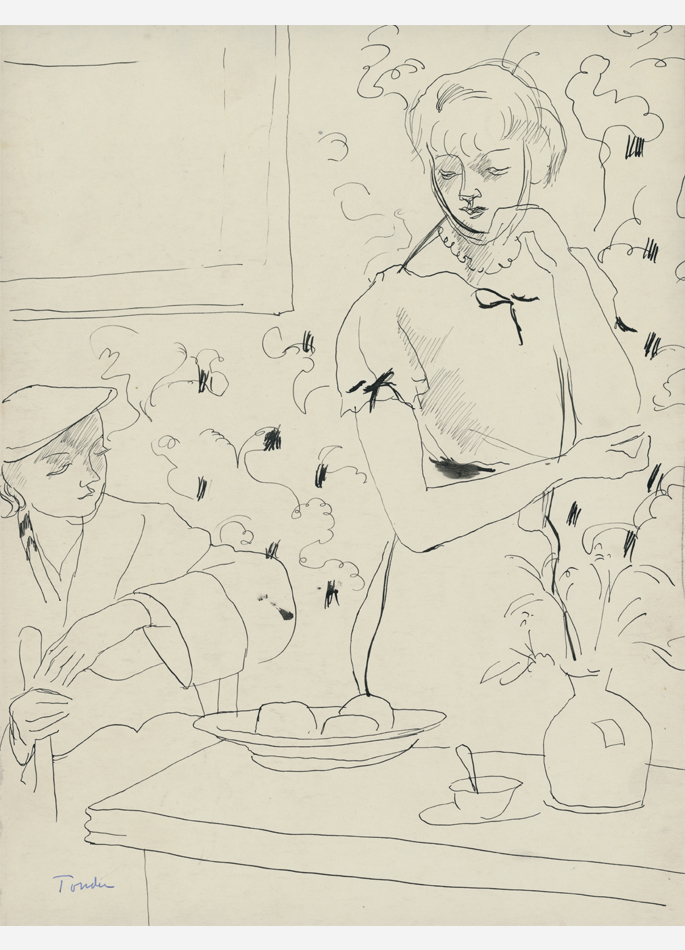 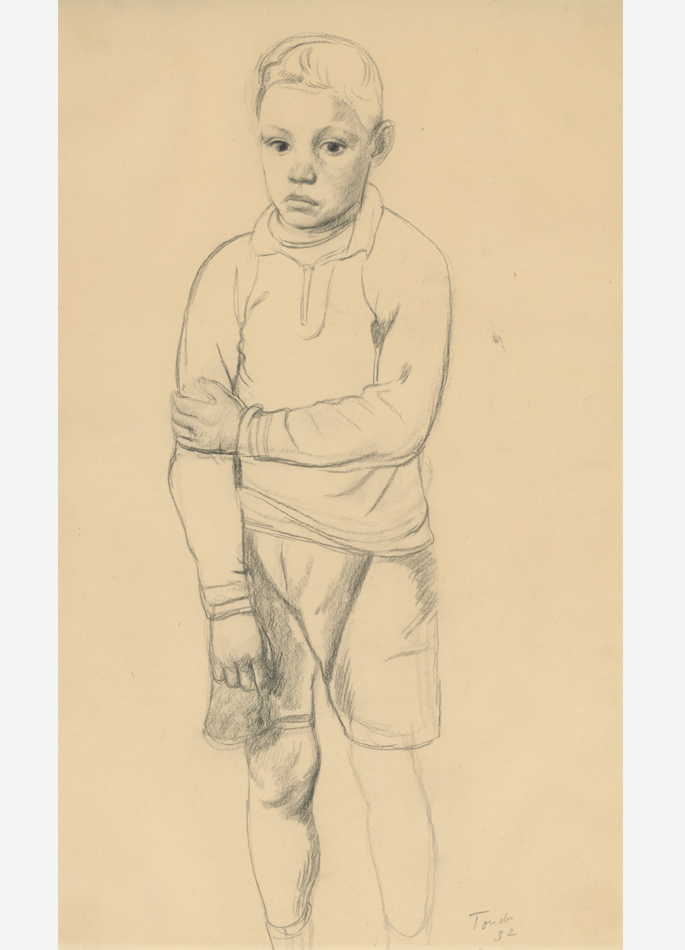 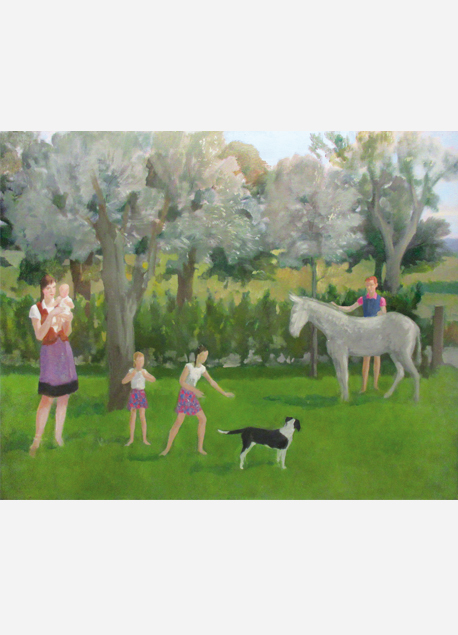 Three Girls in a Field 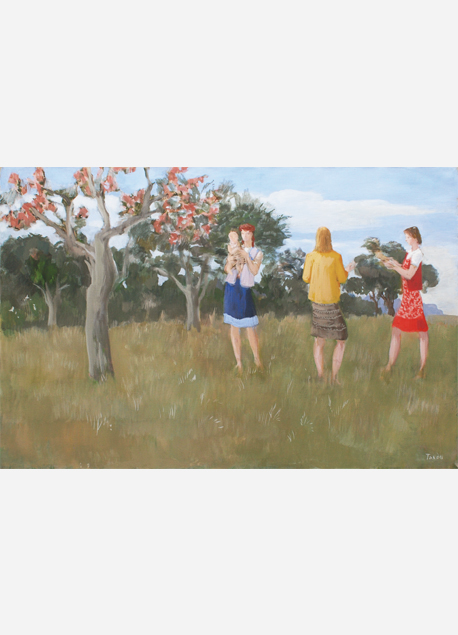 The Love of Life 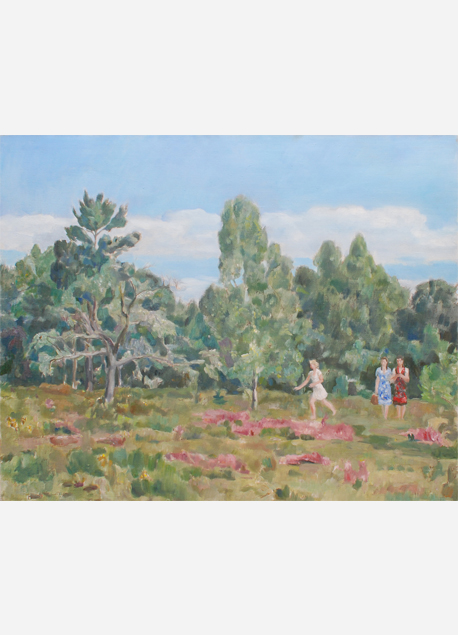 The Edge of the Wood 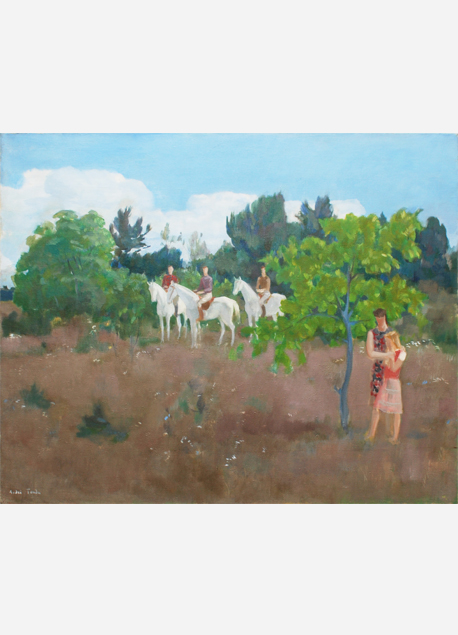 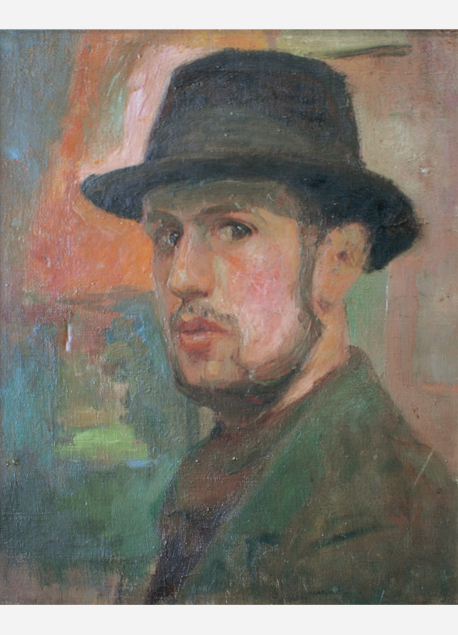 Odette in the Studio 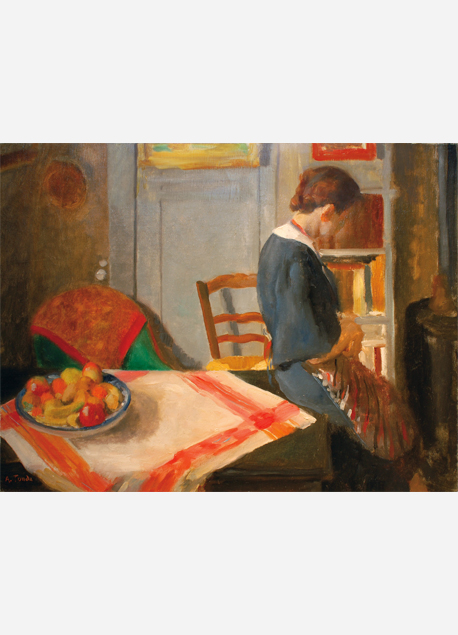 In the Dining Room 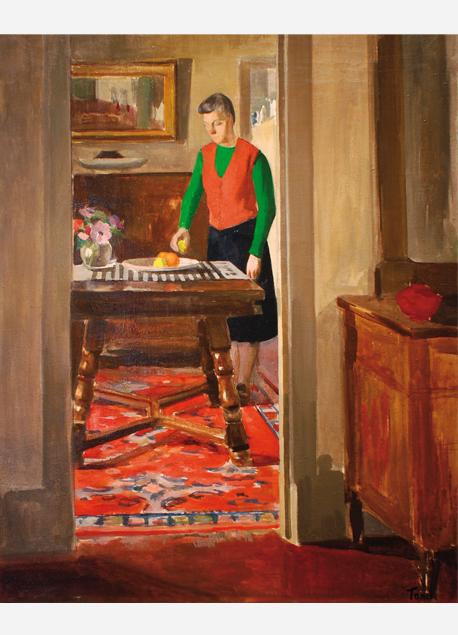 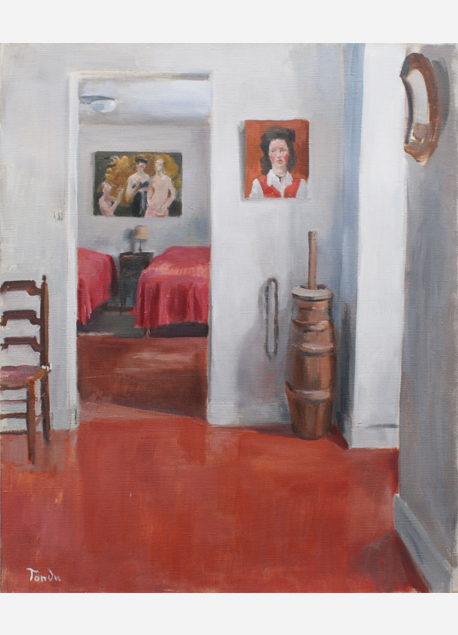 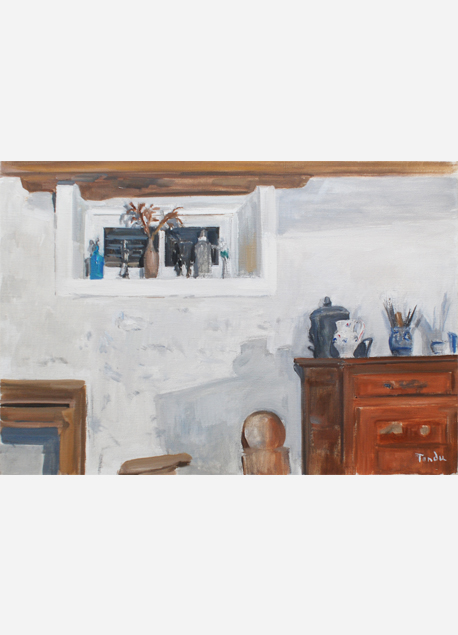 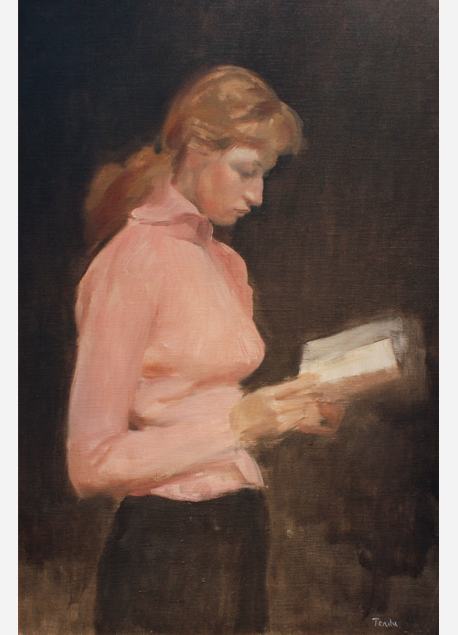 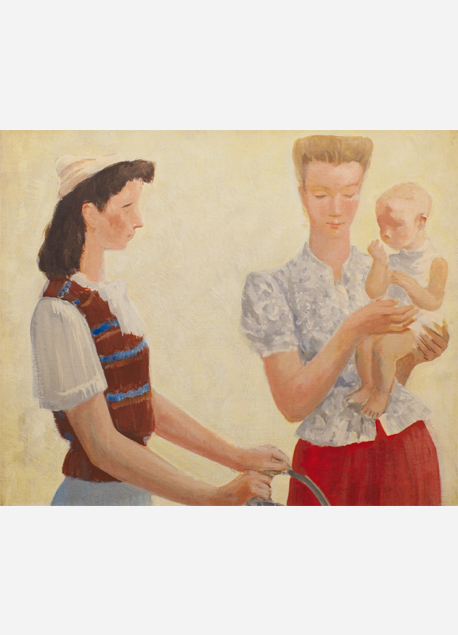 Reading in the Living-Room 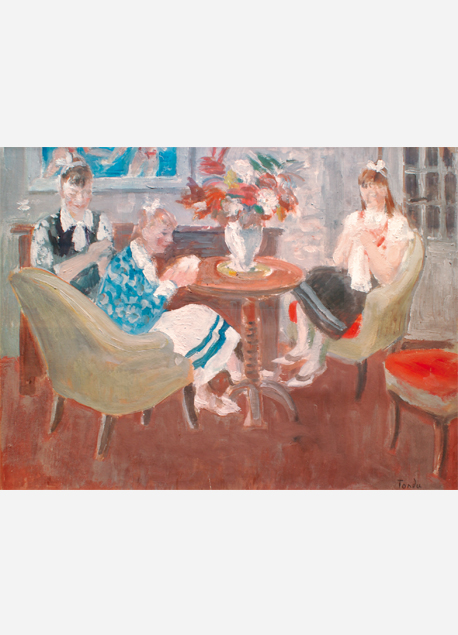 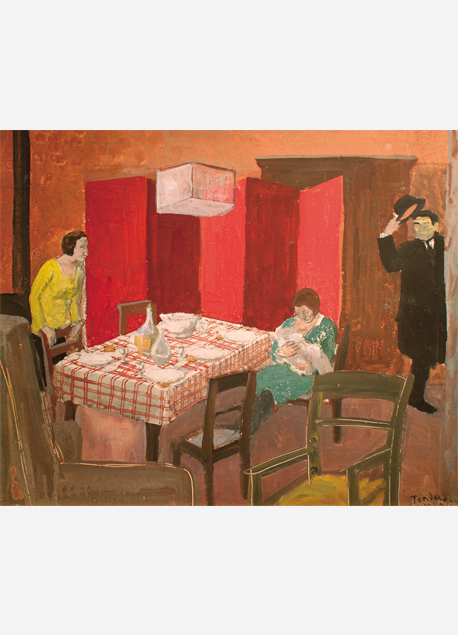 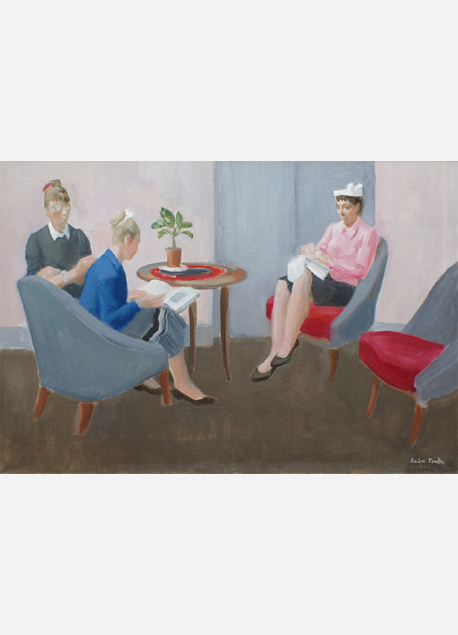 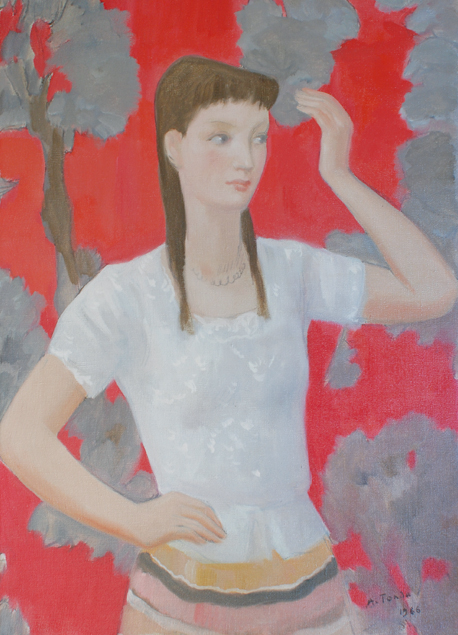