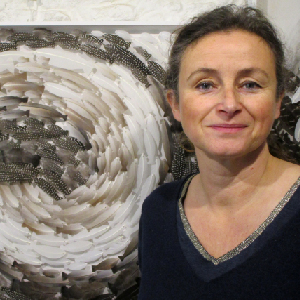 As nicely put by a Chinese proverb, “whoever sees the sky in the water, sees the fish in the trees”. The saying claims, in a way, that any kind of magic is possible in this world –starting with the craftsmanship of Anne Limbour, a Breton artist born in 1971.

What does her work indeed suggest, if not a re-creation of the world… A world in which the fish are no longer dressed in scales, but in these feathers that she picks up at random, then that she skillfully presents cut out, assembled, pointed on a board, in a frame, under a glass.

Anne Limbour’s work is not only a meticulous enterprise, but it also bears a poetical, tender and generous dimension — which Jean Cocteau would have been fond of. Think about it: fishes looking like costumed sylphs with shafts and spikes; fluffy, ambiguous and mysterious living beings in symbiosis with air, wind, water and currents, which never fly nor swim and yet invite us to do so…

In that respect, it is no surprise that Limbour became part of the list of prestigious living artists that the Cristel Editeur d’Art Center gathers regularly. Just as Eva Jospin’s cardboard forests or Marinette Cueco’s ecological braidings, Limbour has important things to tell us.
Anne Limbour was praised for her singularly soft and powerful work from her first exhibitions. In 2008, she won the Public Award at the Salon de Douarnenez and the Salon of Saint-Briac-sur-Mer. She also won the Public Award at the 2011 Salon de Saint-Brieuc and the Plastic Arts Awards at the 2015 Breton Painters and Sculptors Biennale in Saint-Brieuc. This is the groundwork of a now well-established reputation for a graduate from the Ecole de la Chambre Syndicale de la Couture Parisienne and a former Christian Dior designer. Limbour’s enchanting re-creations must be looked at as a pure artistic production, stirred by the genius of motion.