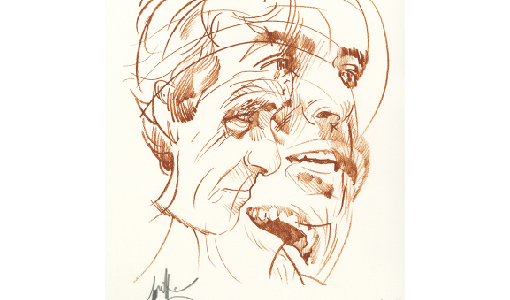 It was often written that he fascinated Pablo Picasso and captivated Jean Cocteau. One might also remind he was only seventeen when a daily paper, with photographs to prove it, threw this big headline to their readers:.“the new Michelangelo is a young French man.” Obviously, this was a way to announce a young prodigy capable of painting the 46 meters long wall of the Forum des Halles as well as engraving in 1979, for the clockmaker Vacheron-Constantin, the most expensive watch in the world! He also is the author of Le Monstre, monumental sculpture settled in the heart of La Défense in Paris, in a museum den measuring 1 000 square meters. “Everything we can say about Moretti is perfectly true”, Jean Schmitt confirmed in a biography. Author, during thirty-two years, of the unforgettable portraits published each month on the cover of the Magazine Littéraire, Raymond Moretti signed, for Cristel Editeur d’Art, his two last lithography prints and his last artist book–the rarest,. printed in only 50 copies to celebrate the fifty years of champion Bernard Hinault.