Onirism… Or, to put it differently, a new way of showing and looking at things. An invitation to dream, formulated by Anne Limbour and Hervé Bédouin, Breton artists that we no longer need to introduce. The first one has been exploring, for twenty years, the magic of feathers; the second one chisels plaster, wood and iron to create fabulous pink flamingos… Two astonishing visions of the world, but one and the same enchantment. Dreamlike! 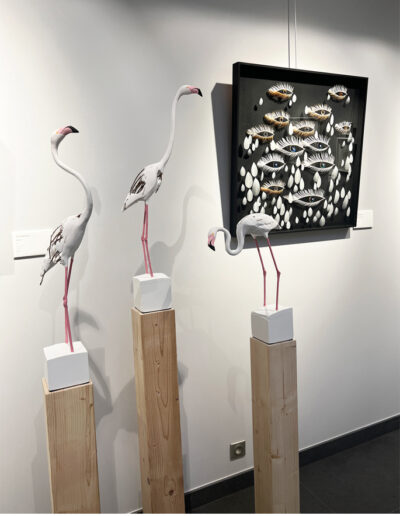 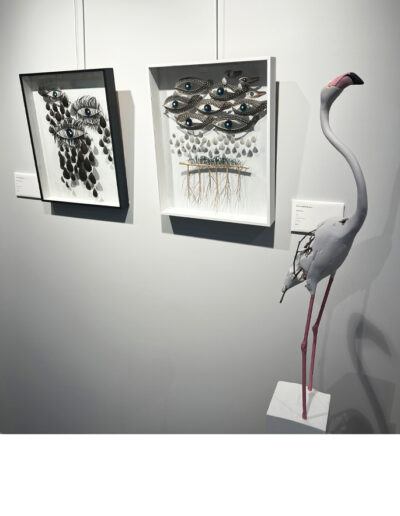 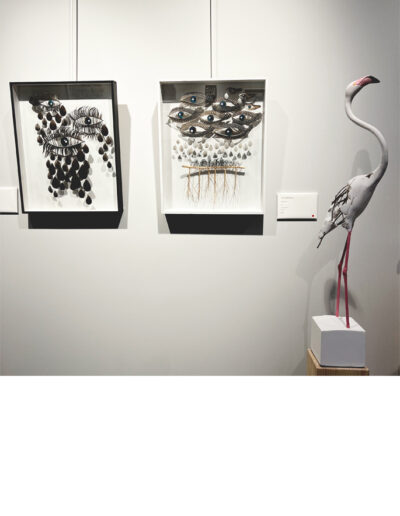 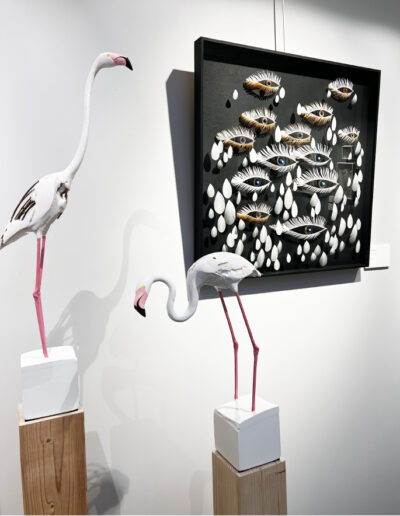 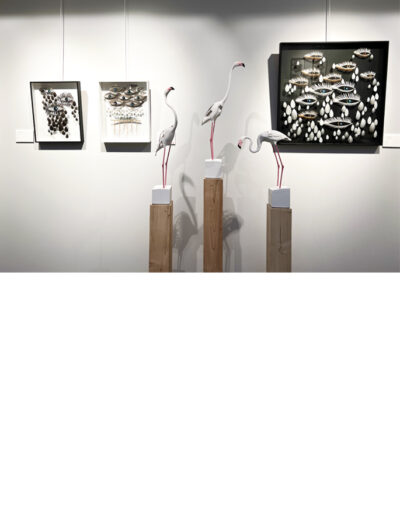 This fourth dimension, similar to a dream…

Concerning onirism, the dictionaries agree: a call to dream. And even, to stick to the definition of Quillet, a “visual hallucination which has the characteristics of a dream”! For its part, the dictionary Larousse takes the analysis even further “Acute delusion consisting of concrete, mobile representations like those of a dream and intensely experienced by the subject.” So that’s where we are as we unveil the thirty-first exhibition of the  Cristel   Éditeur d’Art Centre in Saint-Malo: a friendly invitation to delirium! An invitation to visual hallucination! An invitation to experience intensely what hangs on the walls, and to better contemplate what rises on the pedestals! What can best be summed up in one word: welcome… Yes, welcome to the world of Anne Limbour, a visual artist whom we have already had the pleasure of presenting in 2016, in the company of Hélène Jousse and Yvette Alde, under a title that sums it all up: “Magiciennes”… Welcome, too, to Hervé Bédouin, a Breton sculptor who has established himself, in a few years, as an absolute creator – a language that is literally without equal. Dreamlike, giving the opportunity to observe the most astonishing pink flamingos, the most singular egrets, that the animal kingdom has ever produced. It is an understatement to say that one remains speechless… Waders as alive as nature, nevertheless shaped by human hands to tell the story, not of a body, not of a beak or a wing, but of the interplay of shapes and shadows, of fullness and emptiness, of air, wind and light. In other words, thanks to an extraordinary art, Hervé Bédouin goes beyond the anatomical stage, if not that of the flayed, in order to reach precisely that fourth dimension which is similar to the dream. An extraordinary journey, shrouded in power, lightness, sensitivity, questioning… Let us allow ourselves to write it, in the eminent sense of this word so prized by Chateaubriand: it is sublime.

Let us now allow ourselves a second dream: the illustrious Paul Claudel, art critic, author of L’Œil écoute, suddenly returned to earth to, as was his wont, draw beauty from the very source of beauty. What would he decide first in the face of Hervé Bedouin’s impulses? What would he decide next in the face of Anne Limbour’s new magic? Would he speak, as he once did of Sergio de Castro’s still lifes, of “a call to the eye”? Of “an unusual call that imposes itself in the manner of silence”? Because, obviously, for the woman who has made a name for herself over the last twenty years by her fantastic reuse of the feather, obviously marking a real turning point in her work, there is now, in this heavy autumn of 2022, a silent supplication, an imperishable prayer: war, Ukraine… The brutality and the horror… This is why, answering her own call, Anne Limbour has sheathed her scissors and her pens: her way of taking up arms! Soft and silky weapons, which, like Hervé Bédouin’s stilt walkers, are strictly speaking from the sky. But weapons that are no less formidable, like Victor Hugo’s famous line:

The eye was in the grave, watching Cain.

Well, such is Anne Limbour’s suggestion today: to look at the world unvarnished, for the time of a wise and poignant tête-à-tête… To see differently and further – further than the incomparable velvet of the eye from which tears of feathers flow. Magic, once again… But, above all, the expression of an immense hope: that the earth, one day, will return to peace. That egrets will one day emerge from the nest. That pink flamingos spread out in the clear dawn…
Artists are our prophets.