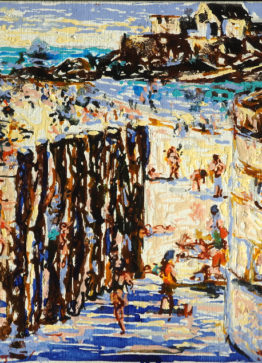 He only ever had one occupation in his life: painting; on wood, on canvas, on paper. Painting like the draughtsman he was born as and the engraver he became, capable of biting copper with a firm yet light touch. One may add that between 1961 and 1976, Sylvain Besançon exhibited a lot, he was regularly supported by the great art historian Jean Cassou. “The stroke of his drawings is subtle; the shading and the darkness are skilful”, he wrote in 1970 to preface a book that combined poems by Marc Verhaverbeke and works by Sylvain Besançon. That same Sylvain Besançon who made the choice –following his very profound inner strictness– to give up exhibiting for more than thirty years to reach the art he offers us today: the art of an authentic artist, inhabited by painting.